A new year has been birthed, and as we’ve pointed out in previous articles, there has been a huge influx of preppers over the past two years. With an interest in prepping comes an interest in food, and food production goes hand-in-hand with that. So if we have a garden, big or small, urban or rural, but it’s not producing as much as we’d like, how can we go about changing that? What can we do to boost production in 2022? In a word: lots!

Production boosts are divided into four basic categories: efficient use of space, soil amendment, controlled environment technology, and season extension. In this article I’ll discuss ideas in each category.

Efficient use of space

The very first (and perhaps easiest) means of producing your food production is to make a better use of your space. If you’ve only ever been able to put four zucchini plants in your garden in the past, if we can find a way to put in eight plants, we’ve effectively doubled our zucchini harvest.

We’ve become more efficient with our use of space. So, just what are some of our means of boosting our garden efficiency? Let’s take a look…

If you can’t grow horizontally, grow vertically! Trellises can be made of nearly anything. Anything from stringing beans and peas on your lanai to making a garden wall using pallets, small boxes on a wall or fence, or soda bottles can add up to lots of extra space. More space equals more food growing in your garden.

This method advocates both intensive plantings and use of trellises to grow lots of food in a very small space. Mel Bartholomew is the pioneer and has written a great book on the topic. By dividing your garden into 1-foot grids, and planting by the grid, we can both increase our garden output and reduce our weeding. Weeds find it difficult to grow when they’re being choked out by big, healthy broccoli. 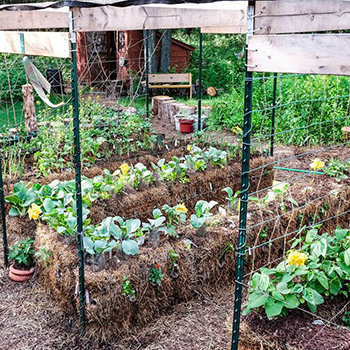 Use containers and raised beds placed in areas that are sufficiently sunny but don’t have good garden soil. Containers are great on decks and can be used to grow just about anything, as long as they’re big enough. Raised beds allow us to control the soil we’re growing in just as containers do, which is their biggest advantage.

Really want to innovate? Stack bricks to create a mound or use retainer walls to terrace a hill in your yard. Terracing has been practiced for centuries in several countries, most notably in mountainous regions in Tibet and the Andes.

Pioneered by Joel Kastern, this method uses decomposing straw bales as a growing substrate. Keep in mind that one uses straw, not hay, due to weed seeds in the hay. This does take some planning, but is another way to turn an otherwise unproductive area into a very productive one. It also yields a compost at the end of the season which can be used next year, either by itself or being turned into other beds. Waste not, want not!

This kind of gardening creates an inverted raised bed and works well in arid regions where water conservation is a must. The bed is dug into the ground, creating a ring that keeps water near the plants rather than allowing it to run off.

If living in an arid environment, this can prove to be a way to produce food despite the environment.

Why not use that fence in your yard to plant a hedge? Whether it’s a grape arbor or a blackberry patch, we can increase our food production by planting perennials in spaces that can’t be used for anything else. These hedges also provide some privacy and in some cases, home security. Who really enjoys sneaking through raspberry thorns?

Soil, in a way, is gasoline for greenery. It’s the smorgasboard of nutrients that plants eat. If the soil is poor, the plant will be poor. In contrast, if the soil is full of nutrition, the plant will truly thrive. If looking for a way to boost your food production, tweaking your soil may be the key.

This method involves adding nutrition to your soil. Supplying additional nutrition to the plants will help but the benefit will also plateau after a certain point. There’s plenty of organic stuff available at home, namely pretty much everything from your kitchen.

And don’t forget the trace minerals, which plants need just as much as people do! Azomite is one source of over 70 different trace elements, and there are commercially available fertilizers as well. But be careful to avoid meat, fish, and dairy products, as these will attract rodents.

These are beneficial bacteria and fungi that aid in nutrient uptake. Rhizobium is a nitrogen fixer that’s naturally attracted to legumes, such as beans and peas. Both are available in some seed starting mixes and as separate purchase from merchants such as Amazon.

These do need to be either inoculated into your soil at planting, or already in symbiosis at planting if you’re using a potting mix containing them. Later is not greater in this case, and while there’s some evidence that some of these may persist in the soil over time, it depends on the organism and soil conditions.

This method uses a custom blend of nutrients and claims to work in any soil, even sawdust. Frequent and consistent watering, along with the usual pruning, are said to be key, and the nutrients can be obtained from any garden store or purchased from them directly. I’ve never tried this one, but I’ve seen others swear by it.

This is a fascinating way to build a mound garden! The garden is constructed in a round form with a compost pile in the middle. Access to the garden is from all sides, as well as a “keyhole” on one side. The garden is layered for drainage, and as the middle compost pile is watered, the nutrients drain into the surrounding bed. Pretty slick!

Speaking of slick, how about layering materials for in-bed composting? This kind of bed starts with a weed barrier, then materials are layered 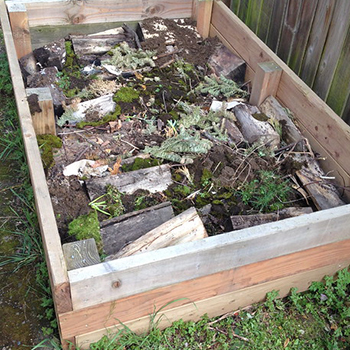 over it lasagna-style and allow to cook down into soil over time. This is considered a no-till, organic method and saves the gardener time shoveling compost by putting the pile where we want it to be in the first place.

These are very easy to grow at home, both indoors and on logs. A wide variety of both medicinal and culinary ‘shrooms are easily obtainable. Generally, mushrooms contain many nutrients, including fiber, B vitamins, and many trace elements.

Do you have a spare table? Try a table top farm! If you’ve been following my adventures as an Accidental Mycologist, you’ll have seen a few resources for obtaining premade kits, such as https://www.fieldforest.net/ These are a great place to start if you’re a beginner, and mine have yielded more than their store value in shrooms. With a bit of experimentation, it’s also possible to obtain fungal culture from the used block to continue growing your own.

If you have polluted soil, one thing a good mushroom can do is help clean it up. This is also known as mycoremediation: removing a wide variety of pollutants from the environment. Depending upon the species, the humble mushroom in your yard can remove heavy metals, dyes, organic pollutants, and pesticides from your soil.

One caveat however: if you’re using them in this way, don’t eat them! Those pollutants will be stored in the mushroom, so they should be tossed somewhere other than your compost pile. This is a way to boost food production by creating a healthy soil where a polluted one existed before.

Yet another way to boost your food production is to create your own environment. How can we do this? Let’s take a look…

These methods require power for lights, pumps, and possibly heat mats depending upon your situation. Basically, plants are grown in a chemical solution. Aquaponics adds fish to the mix, and has been done using soil. Some even grow mushrooms this way, using logs.

While you’re at it, why not use the walls of your home or apartment? Again you’ll need power, and if you rent, your landlord might have a say in this. But it can be done, and with sufficient light, just about anything can be grown indoors. Use your walls and columns, toss your house plants in favor of food plants, and boost your food production!

Cold frames, both sunken and on top of the soil, create a micro-environment for the plants inside. Sunken frames are a bit more insulated from very cold temperatures, but even a frame on top of your lawn can help if the plants are a bit frost-tolerant.

It’s technically possible to grow throughout the winter, or so some claim, even in subzero climates. I’ve seen that one in books but never in practice. Greenhouses operate on the same principle and can be heated in winter as needed. Around here, these are used mostly by commercial growers. Home gardeners use smaller versions if they have the space, but everyone is done with growing of any kind after the first hard freeze.

These also create a micro-environment with a bonus of keeping out insect pests, but these must be removed for pollination to occur. Hoop houses, like greenhouses, take up space that may not be available in the small urban yard.

So here we have it! Several ways to boost food production, by amending the soil, using space creatively, extending the growing season, and turning your indoor spaces to food production. How do you boost production in your garden? Tell us in the comments below!

There is no better time than now to finally put some money into raising your own chickens. Daily eggs and fresh meat are two of the benefits here, and with the ever-increasing price of meat, this may be well worth your effort. We’ve written about the benefits of chickens, and what it takes to raise them several times in the past (you should check those articles out), and yes, they are worth your time.

What are you doing to boost your food production in 2022?

It’s looking as if this may be one of the rockiest years that these United States have ever seen. Are you preparing your food production ability accordingly? What are your next steps? What are you currently doing? Let us know in the comments below!

This article was written by Jayne Rising and first appeared on The Organic Prepper. 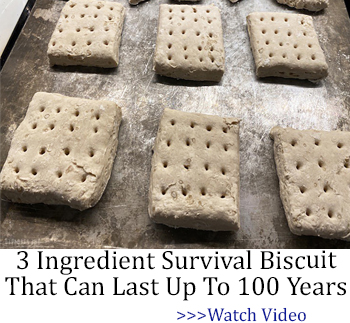 How To Make Bio Fuel From Kitchen Scraps