Worm-Farm: The Most Profitable Farm Per Square Metre

Earth worms are an exceptionally important part of our environment. Farming your own Earthworms allows you to bring several benefits into your garden.

In this article we will first look at a bit of Earth worm biology, and then how to build a simple trouble-free worm bin. Then we look at how to feed the worm castings and Earthworms to your chickens so that the chicken compost/worm castings produced are of a high quality. The by product is delicious more nutritious eggs.

There are more than 7000 known species of Earthworm on our planet, and probably thousands that must still be discovered. All Earthworms perform important functions in the soil, recycling complex organic matter and releasing nutrients for plants, fungi, and bacteria. They aerate the soil as they move through it and make tunnels which improve water infiltration into the soil. The Earthworms also move soil from deeper down to the surface cycling soil upwards and helping build a healthy soil.

Worms For Compost – Which Species To Choose?

If there are 7000 species of Earthworm, which ones work the best for a worm bin or worm box? For a worm farm we want a species which is tough, able to live in high density, that can process a wide range of food source, and which is nutritious. This narrows us down a bit to a few thousand species, and luckily the species Eisenia fetida has emerged as a preferred species.

Eisenia fetida – What Does This Smelly Worm Do?

This is a worm that has been spread around the world. It originated in Europe but has been introduced to nearly every continent bar Antarctica. The literature will tell you this worm is very difficult to find in the soil, but I find it is easy to find. If you have organic matter that is quite wet and look under rocks and planks and other flat surfaces in that area, you will find these worms hiding under the rocks. 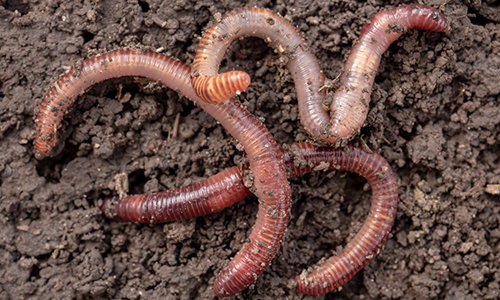 Eisenia fetida is a fast growing, rapidly multiplying worm. In my experience if you are feeding them well, and the conditions are right they seem to double in biomass every few weeks. This depends on what you feed them.

These worms stink and produce a liquid that runs downwards – this is called vermiwash (some folks call it worm wee). This can be harvested. There are many beneficial bacteria, fungi, enzymes and nutrients in the liquid and it also may at times contain compounds which inhibit the growth of pathogens. An example is Lysenin.

Eisenia fetida when cultivated in a worm farm will rapidly convert garden waste and waste food into vermiwash and vermicompost. Both products add a lot of value to your garden. We will go into this in a bit. A mixture of high-quality energy dense food (pumpkin peels being a good example) and lower quality less energy dense food (leaves) will keep your worm farm happy.

Now that we know the basics, lets summarize these:

We need to design the system to separate these, as vermiwash is useful for some applications, and vermicompost for others. Earth worms are nutritious as animal feed.

How To Build A Very Simple Worm Farm In 20 Minutes 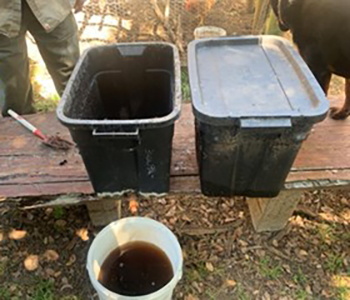 This is based on my Dad, Dr Jim Cambray’s design. He has had a long career as an ecologist, and consequently designs things to work with nature as much as possible. Nature loves simple systems.

You will need two tote bins.

Drill a hole at one end of the first tote. This will be the point at which the vermiwash leaves the worm farm and collects in a bucket below. Both my Dad and I have tried taps here and they just clog. Rather just have a free flow system.

Many people try to put a tap here – this just never works and adds a lot of time and fiddling to making your system. With time the tap always gets slugs and gunk in it and clogs up. 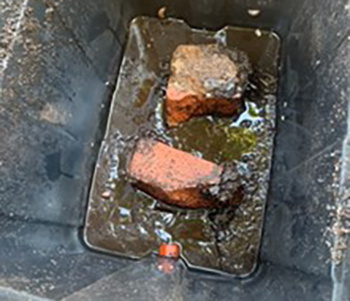 Drill a few holes in the bottom of your second tote – these holes drain the vermiwash or worm wee/tea out of the system.

Place this second tote into the first so that it rests on top of the bricks. Place the entire setup on a stand of some sort and place a bucket under it to collect the vermiwash. You can now put waste materials to compost in the worm bin.

You will need a source of Earthworms to stock your worm bin. You can normally find somebody on the internet who has a worm farm and buy/swop/beg for a handful of worms. These will get your worm bin started.

In certain parts of the world there are large scale sellers of Earthworms – make sure you are buying Eisenia fetida. These worms are also called red wriggler worms, trout worms, tiger worms, panfish worms, manure worms, redworms or for some reason even brandling worms. I’m sure they have many other names. 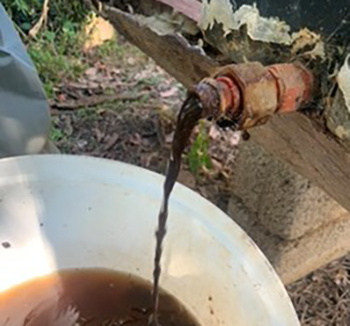 Alternatively, you can go and look under a rock or bin in a moist area rich in organic matter. They often hide under such things, and you can collect many this way.

I have a bin in my garden where I keep chicken food. Under this bin you can find the red wrigglers which like to hide during the day. They like dark wet places near abundant food, such as chicken food spills etc.

Once you have stocked your worm bin, the process will begin.

As the worm population multiplies the bin gets more and more productive. And full. The easiest way to incorporate the benefit of this into your garden soil is to take the worm and vermicompost mix and feed it to your chickens. They will eat most of the worms, and the compost then gets mixed into the chicken litter.

You should ideally be placing leaves and soil and other garden waste in the chicken coop -their little feet turn this over many times a day and within no time at all you have a rich soil amendment that has nutrients from the chickens and the worm farm. This is magic soil! 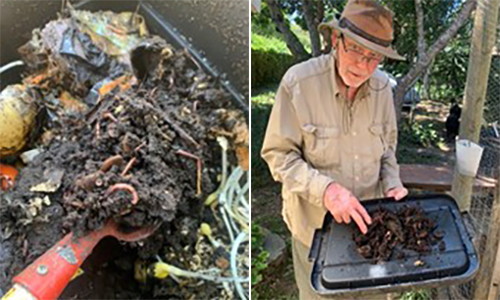 The well-balanced ecological principles of simplicity and sustainability that my Dad has developed over the years use a simple garden fork to harvest castings and earthworms that then move to the chicken cage on the spare lid (remember there were two tote boxes, but only one lid is needed for the worm farm). 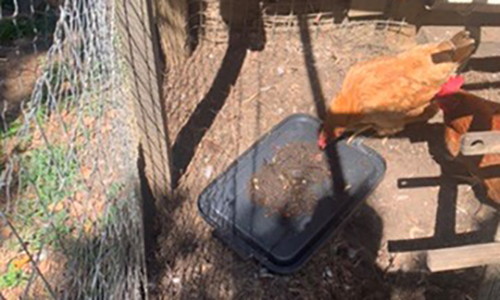 When using worms for compost you improve the quality of the compost – it is much better than if you just let it sit in a heap and compost. The earthworms add value and increase the nutritional quality of the compost – it is now vermicompost. If you now add this compost to chicken manure and let the chickens add their bit it becomes even more valuable. You are creating a small ecosystem cycle, and building high quality top soil/compost for your garden.

The vermiwash, or worm tea, or worm wee, or whatever you choose to call it is also an amazing nutrient. I pour this through a cloth to filter it and then put two cups into a 2 gallon watering can and use it as a foliar feed. It helps to stop powdery mildew and gives the plants an overall boost. It appears to inhibit spider mites and generally just helps your garden be the best it can.

Feeding earthworms to chickens improves the nutritional density of the eggs. A chicken egg from a hen which eats a lot of earthworms and grubs has a darker orange yolk and a more balanced lipid/fat profile. For us, much of the long term health of our cells is based on getting the right lipids in our diets – chicken eggs that are from chickens with a balanced diet that includes worms and insects are of a higher quality than straight feedlot chicken eggs.

Your worm farm is a very productive valuable asset in your garden. Not only does it convert waste into nutrients, it also provides you with earthworms for bait! And that is a big bonus. Catching a few fish helps bring additional nutrients into your garden! And remember, chickens eat fish scales! 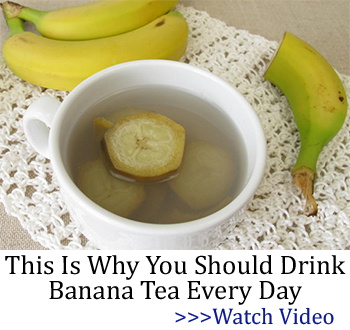 How To Make Bio Fuel At Home From Leaves And Manure

The Ultimate Guide To Composting

Chicken Secrets Nobody Told You About