Stop Pulling Out This Plant, Do This Instead

It might surprise you to learn just how many valuable plants are growing in the wild just waiting to be found by a savvy forager. In fact, some of these plants could be growing literally right outside your front door.
At first glance, some of these plants get dismissed as pesky or invasive “weeds” better suited for the trash or compost than for harvest— but boy, are people missing out!
Purslane is one such “weed” that not only tastes great, but is high in vitamin C, Omega-3 fatty acids, antioxidants, iron, and many more. So the next time you’re ridding your garden of “plants growing in the wrong place”, make sure it’s not purslane you’re pulling. 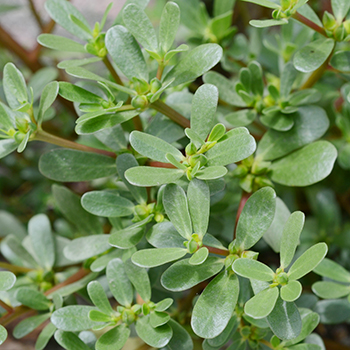 Purslane is known scientifically as portulaca oleracea. You will also hear it referred to as pusley, fat weed, little hogweed, and pigweed. The weed originates from Asia, but it has spread throughout the world. Purslane only needs sun and clear ground to grow, it does not require nutrients or a specific type of soil to grow. You will not have problems with this plant during the winter months because it prefers warmer temperatures. Nevertheless, it does have a preference for drier soil. Purslane is both friend and enemy of the garden, it spreads very quickly, will take over any space it is given and will destroy any plant in its path. Nevertheless, this plant also has many health and medicinal benefits.

Purslane is an attractive-looking weed with yellow-colored star-shaped leaves. They grow close to the ground in an outwards direction in a circular shape. This plant is typically found in recently cultivated, or clear uncultivated soil.

What’s So Special About Purslane?

Although we consider purslane a weed, it is one of the most nutritious plants you can find, packed with important micronutrients, while being low on calories. It contains beta-carotene, vitamins A, C, and E, as well as some of the B vitamins, magnesium, calcium, potassium, folate, lithium, and protein. 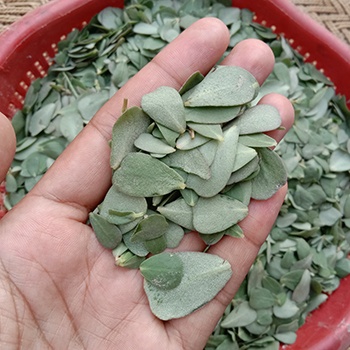 But the most important thing this vegetable contains, is Omega-3 fatty acids, 8.3 mg for every gram of weight. Nutritionists have long touted the importance of eating fish or taking fish oil, as a source of Omega-3. Purslane provides an even better source of this nutrient for those who can’t or don’t want to eat fish.

It is also an excellent source of melatonin, which helps regulate sleep. Melatonin is an antioxidant, which acts as a hormone. It is naturally found in the body, as a product of the pineal gland. Those who have trouble sleeping often have a low level of melatonin in their bodies, which is normally treated by taking melatonin in tablet form. However, this plant offers levels of melatonin that are as much as 1,000 times higher than that available in any other plant.

How To Use It

Although it’s considered invasive and hard to get rid of, people have intentionally cultivated it for centuries.

The leaves, stems, seeds, and flowers are all edible and have multiple survival and medical uses.

Eaten raw or cooked, this plant plays host to many important vitamins and nutrients that could be hard to supplement in a survival or SHTF situation.

As with many herbal medicines, there are a variety of different ways of using purslane. You can buy dried and crushed purslane, to be taken as a dietary supplement. However, we’re operating under the assumption that you need purslane for survival purposes, where that won’t be available.

Related: 10 Plants You Should Never Grow In Your Yard

For internal infections and other conditions, the purslane is best eaten, either raw or cooked. However, as is typical for vegetables, some percentage of the nutrients come out of the plant while it is being cooked, especially if it is boiled. Using it raw, such as in a salad, ensures that all the nutrients are received.

When using purslane or other herbal medicines for treating skin disorders, burns, or insect bites, it is best to make it into a poultice and apply it directly to the affected area, binding it with a cloth. Crush the purslane with a mortar and pestle, before applying, so that the inner part of the leaf and the sap can make contact with the infection. The nutrients will then be absorbed directly through the skin. 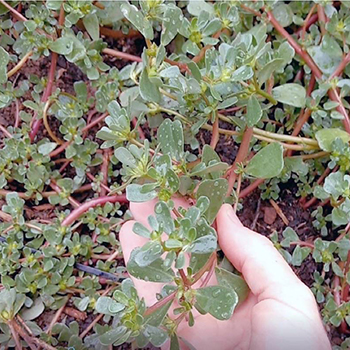 Yes and no, purslane is perfectly safe for humans but not for dogs. It contains soluble calcium oxalates and when ingested, it can cause kidney failure and eventually death. If you suspect your dog has eaten purslane, take him to the vet immediately. Symptoms of purslane poisoning include:

History states purslane was one of the first vegetables consumed by mankind. It can be cooked or eaten raw and has a spinach/lemon taste. However, if you are planning on eating purslane, make sure it hasn’t been sprayed with herbicides or fertilizers. 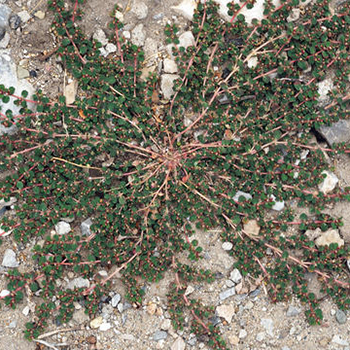 Purslane has a twin called leafy spurge; you will also hear it referred to as Euphorbia esula L. This noxious invasive weed originates from Europe and grows in various habitats such as prairies, pastures, irrigation ditches, river banks, and roadsides. The Royal Horticultural Society has labeled leafy spurge as a dangerous plant because it contains the alkaloid euphorbon which is highly toxic. When it comes into contact with the skin and eyes it causes severe inflammation. The skin becomes photosensitive and causes blisters. If it gets into the eyes, it can cause conjunctivitis and at worst, blindness. If you do come into contact with leafy spurge, wash the area immediately with soap and water. However, if it gets congealed on the skin, water won’t work. You will need to use milk or soap. Horses and cattle won’t eat the plant unless they’re starving. However, goats and sheep will eat leafy spurge without it causing them any harm.

Purslane and Its Health Benefits and Medicinal Uses

If you don’t manage to spot purslane weeds early, and they mature, once you’ve lifted them out of the ground, they are extremely beneficial health-wise. If you choose to eat purslane the health benefits include:

Purslane also has several medicinal uses including the following:

This is the best example of how a common weed can become handy for a homesteader.  So whether or not you decide to go hunting for purslane growing on your property, it’s at least a good backup food source to have.

Dangerous Insects That Are Actually Good For Your Garden