A Warning To All New Homesteaders

I was a twenty-seven-year-old working in the spirits industry, traveling a minimum of 4 days a week internationally. I had been married for two years at that point, but unless my husband came along on my business trips, we weren’t able to spend that much time together. On the rare occasions, he was able to go on a trip with me, we would often retreat to the nearest countryside for a hike and a picnic.

It felt freeing to be among the singing birds, the forest, rolling hills. All things that were absolutely foreign to me, having been a city girl all of my life. We found ourselves dreaming of getting away from our every day and slowing it down in these moments. Slowing it down, to us, meant tending to our garden, where we grew our food – selling our crops at the local farmers market – spending our time in a hammock with a book.

On one such occasion, we met with a business partner in Southern Burgundy, France, where he owned a small chateau. We were in awe of the slice of paradise he called home, surrounded by lush, wild forests and rolling hills. After a long weekend, we were convinced that this was what we needed in our lives and said so over a long lunch on the chateau terrace overlooking the surrounding mountains. Our host casually stated that he was in search of a new guardian couple, and if we genuinely wanted to call it quits, we could take on the role and be given a parcel of land of our own with cottage and forest and an open prairie in exchange for our keeping an eye on his property while he was away ten months a year.

Six weeks after that moment, we arrived with four suitcases and our two city cats. We felt so strongly about this need for a country lifestyle we gave up everything back home and moved with only the thought that we had no other choice but to do so. This was an opportunity not to pass up. Obtaining a visa for myself came fast and easy, as my husband is a French citizen, but that’s about all that came quickly. We had big visions of how we would organize our new country lives and live modestly and self sufficiently. Only the plans we made did not pan out the way we intended, and those visions never truly met.

Related: How To Organize Your Garden For Maximum Harvest

First came the renovations. We wanted to renovate our new home to the point where we would not need central heating. The idea was that we would add sufficient insulation and a powerful wood stove that would heat up most of the house, which at that time did not have either one of those things. The insulation was easy, but our wood stove and exterior pipe installed not so much. We struggled with getting a perfect fit. We eventually were able to get it done, only to realize a few weeks later, with the first snowstorm, that we did not choose the wood stove’s optimum location to heat the entire cottage. 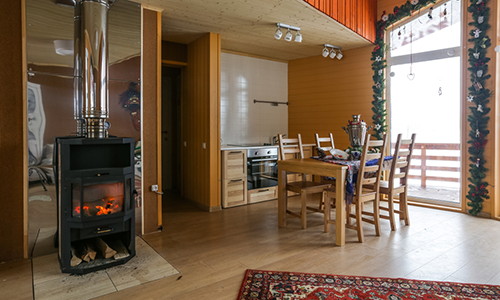 Then came the garden. The idea was that we would plant and grow enough crops to feed ourselves and sell on weekends at a local farmers market. So much easier said than done.

For those who have experience gardening on a large scale, you know very well the intense labor that goes into it. Being absolute novices, we ran into issue after issue that we could not immediately mediate.

One example, slugs. Oh, those slugs! We tried every natural attempt to keep them away from our precious crops that we could, and they would still put a dent in our leafy babies.

Another example, deer. The forest deer would often find their way into our garden, enjoying the heads of lettuce intended for the weekend markets.

And the last example, goats. Our goats. We had purchased goats for their milk without knowing very well what to expect from those hooved goofballs. Despite our attempts at securing their field, they always climbed their way out and enjoyed an all they could eat buffet in our girls in the early mornings as we were rising for the day.

We had endless problems with humidity, keeping enough wood, as we were sourcing the wood from our forest and cutting it ourselves. We spent most of our time that first winter and spring outside cutting wood for the fire, then inside enjoying its warmth.

Then, of course, we kept chickens, but we had endless chicken lives lost the sneaky red fox and the eagles and falcons circling the fields looking for prey. We wanted our hens to be free-range ladies, but no matter the precautions we took and the various caged in coops we built, they would still turn into another animal’s meal.

Related: 6 Small Animals You Can Raise On Your Property

Everything that needed work done or tending to, we wanted to take care of ourselves. And we did! But the calm, quiet, relaxing life we had envisioned was far, far off.

We replaced our crazy days packed with hopping from meeting to meeting, city to city, with non-stop laborious days that seemed to never end. We never had a day off. Our comfort depended on our labor, and the work was always so enormous that comfort seemed like an idea out of a storybook.

Eventually, three years after starting our new adventure, things began to settle down. We know now that we very quickly and naively went into this new venture.

So much more thought, preparation, and education could have been made before committing ourselves to this life. But despite all of the challenging moments, we made it through, older, wiser, stronger, and deliciously self-sufficient.

So for all of the dreamers out there looking to commit to homesteading or just beginning their journey, I leave you with these words of advice: persevere, ask for help when needed, and enjoy the ride!

10 Money Saving Tips From A Cheapskate