Editor’s Note: The next world war will be as “inevitable” as the other two.

If you live in or near a nuclear target you don’t have too many options. The least you can do is to know the 4 Signs of Evacuation.

When to Evacuate the Nuclear Target Areas

1 – When Your Electronics Stop Working (most of them – cars, phones, the grid…).

Most experts agree that the next nuclear war will start with at least an EMP. If one of the nuclear powers blasts a nuclear weapon 275 miles above the US it will produce an EMP that will basically send us, the Canadian and the Mexicans back to the Dark Ages. This is exactly what our enemy wants: to disrupt our communication and our ability to retaliate at full capacity. I have something you need to watch. It’s much better than I am at explaining the threat. Watch it and learn what you should fear most (Video), what an EMP effects and how you can protect your electronics, car, mobile phones, etc.

It doesn’t matter if it’s in the US, Russia or China… I’m thinking that when a nuclear bomb explodes we face 3 possibilities: a nuclear war which may involve the US, nuclear terrorism which means that the first explosion may be followed by another four, or human error like in 1956 when the US Air Force accidentally dropped two atomic bombs on North Carolina. If it’s the last case… then yes you’ve probably evacuated in vain. But the risk worth the effort!

3 – When a Nuclear Bomb Explodes a Few Miles Away, But Does Not Kill You.

If you’re not killed in the first few minutes, you can live a lifetime or die of cancer in the next few days. The longer you expose yourself to radiation (in the radioactive area) the lowest the chances to survive. Take your family and leave as fast as you can!

4 – When We Declare War on Another Nuclear Power or Vice-Versa.

Out of curiosity I searched for maps that would reveal nuclear targets in the United States, and I’ve posted them here for your interest.

The nuclear targets map shown bellow is one that I put together based on a number of factors while looking at other maps and data including military installations, nuclear weapons storage and 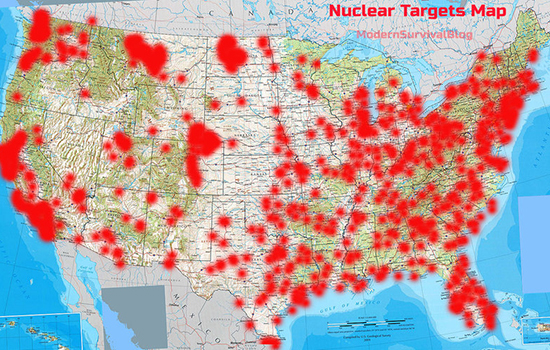 silo locations, bases, cities, etc.. No doubt I’ve missed a number of them, as well as other probable strategic locations, but it’s simply food-for-thought.

The large target ‘blob’ areas shown within the apparent sparsely populated regions of Montana, N.Dakota, WY/NE/CO represent known ICBM silos and nuke storage. Also, it may seem like there are more ‘red dots’ on the map than any probable nuclear attack, but believe it or not, there could potentially be more – given the many thousands of nuclear weapons in Russia (for example).

The nuclear target and fallout maps shown below are in the public domain. They vary with regards to nuclear proliferation and opinion of the day during the time they were published years ago.

Some maps are older than others and might not represent some of the changes which have occurred since their publish, but they are still interesting to examine, especially relative to one’s own location…

No one will win a nuclear exchange. History has shown that there have been psychopathic leaders – who had they possessed nuclear weapons, they surely would have used them. Are there still such people today? Of course there are. Lets hope that none of them ever are in control of ‘the button’.

The real effects surrounding the nuclear targets on any given map will depend on the type of nuclear detonation.

A ground burst detonation will not only pulverize everything within a given radius, but will also pulverize many countless tons of soil and dirt into the atmosphere. This will create a very dirty nuclear fallout situation. 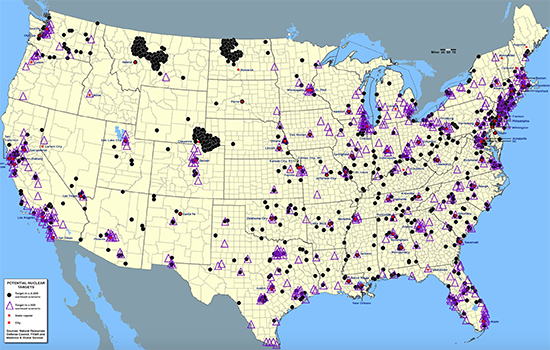 An air burst detonation will still destroy buildings and everything on the ground from its shock-wave (within a blast radius), but it will not pulverize the soil and ground like a ground burst detonation would. This will result in less overall fallout in the atmosphere, however this fact is not to diminish the consequences…

In both circumstances, radiation (particles) will reach into the atmosphere and drift with the lower and upper level winds. While they will eventually fall out (some quicker than others), the effects could be long lasting.

There are many nuclear power plants located across the country. If the power grid (or part of the power grid) goes down during a nuclear exchange, there will additionally be a high probability that some (or many) of these plants will present a real and present danger if they cannot ‘scram’ in time – while critical systems are held up by diesel backup generators and dependence on a constant delivery of fuel to keep them running.

The Russians (and others?) are apparently ahead of the US with regards to EMP research and technology. Some believe that a nuclear first strike will ‘first’ involve a salvo of EMP detonations at high altitude (potentially via orbiting satellites, or launched from submarines or even off-shore freighters). This will likely take down the power grid, followed by a first wave of nuclear strike. The primary targets will likely be military installations, while a secondary wave will broaden in scope. A third wave would likely involve strategic bombers mopping up what’s left. The first and second wave could be all over in minutes to an hour (point being – it will be fast).

This article was written by Ken Jorgustin. If you liked it, you can visit his website at Modern Survival Blog

US Nuclear Target Map. Do You Live in The Danger Zone? (Video)

Meat Prices are SKYROCKETING. Here’s How to Get Ready