Step By Step For Butchering Chicken

Chicken meat is one of the most nutritious meals, especially since it’s packed with proteins, vitamins, and other minerals.

While most people enjoy eating chicken, not everyone can butcher one. Some people think the process of butchering a chicken is way too engaging and even inhumane but the truth is that once you get the hang of it, you’ll find it easy and less complicated.

Again, there are more humane ways to go about it so you don’t have to worry about putting your chicken through so much torture.

Ready to gain some skills? This guide contains a detailed process of butchering a chicken without contaminating it. Let’s dive right in!

Prepare The Set Up

You want to have all the equipment ready and get over with the activity as soon as possible. You also want to keep the chicken as clean and uncontaminated as possible. The idea is to have everything you need ready before getting started.

I usually boil my water, create a butchering platform depending on the number of animals I’m butchering and their size, bring a trash bin, have an extra tray or pot, a sharp knife, and lots of water for rinsing.

Tip: Plan ahead to make the process easy, fast, and to avoid contaminating your chicken with fecal matter.

I live on a farm where I allow my chicken to roam freely in a specific part of the garden. Normally, I’ll butcher a chicken that is older, not as productive, or simply one that is big enough to feed my household.

I know catching a chicken, especially, on an open farm can be challenging, but the classic method of tricking them with some seeds works perfectly fine.

Tip: To avoid the hassle of having to chase the chicken around, just isolate the chicken the night before and keep it in an enclosed space. 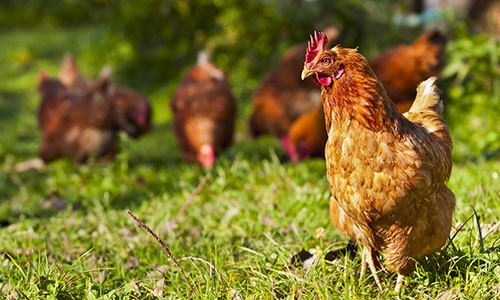 This is usually the deal-breaker for most people.

Trust me, I wouldn’t eat chicken unless a farm hand helped decapitate it. The thought of having to hold it down used to scare me up until I learnt a trick I’ll share with you shortly.

Normally, the chicken keeps flopping after you cut its head off, which can freak you out if it’s your first time. To avoid such a scenario, keep holding the chicken upside down after cutting its head off. If possible, secure its wings too.

Tip: Secure the chicken after decapitating to prevent it from creating a messy scene with blood stains all over.

Related: 10 Common Mistakes You Should Avoid If You Want To Raise Chickens 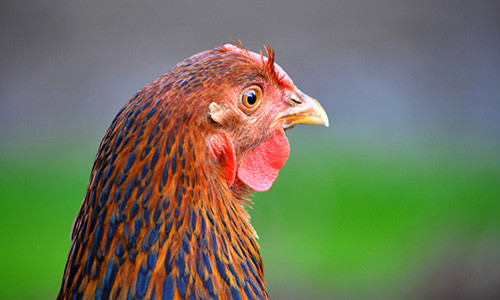 I normally use hot water between 120°F to 135°F. To avoid cooking your chicken, you need to keep the dunks very brief. Dunking the chicken, a couple will be enough.

If you are a beginner, don’t dunk the chicken immediately after cutting the neck. This is because the chicken might be having reflexes which could make it flop and splash the hot water on you.

Tip: Heat the water to the right temperature, keep the timing right, and immerse the entire carcass including its feet. 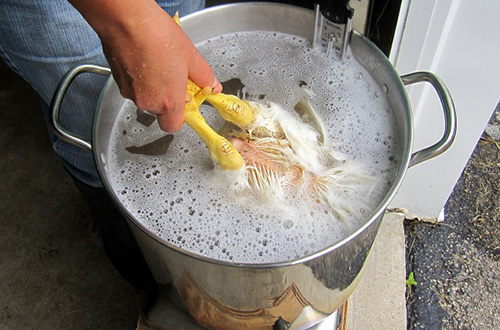 Pluck The Feathers Out

If you scalded your chicken for too long in boiled water, you might notice some skin coming off when defeathering.

Tip: Keep the platform clean. This makes it easy for you to spot the parts of the chicken you haven’t plucked. 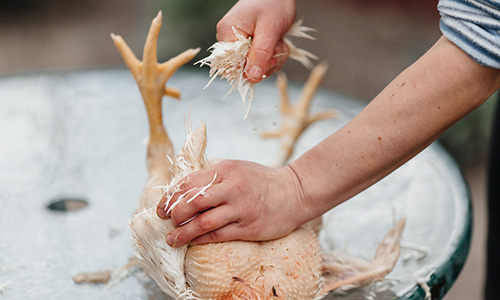 Nobody likes having feathers and hairs on their chicken. Hairs are different from the feathers and plucking doesn’t work on them. Luckily, getting rid of them is not rocket science. Just hold the carcass on top of a fire to get rid of them.

Tip: Singeing is different from roasting, so keep it light and fast. 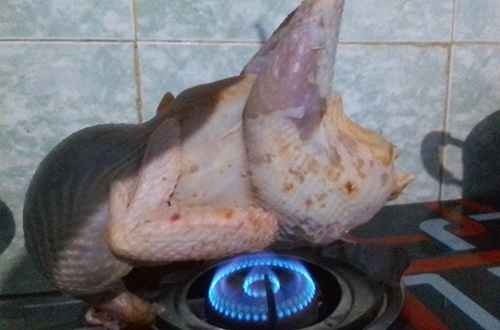 I normally serve the feet to my other farm animals as protein. Most free-range chickens have tough feet which will be hard to eat. They make great soup though.

To remove the feet easily, I normally bend the feet backwards to push the hock joints upwards.

Tip: Be sure to remove scales from the feet if you want to keep them and clean them thoroughly.

Cut Off The Oil Gland, Crop, and The Neck

The first thing you want to remove is the crop. This is the stomach of the chicken where all the food substances it consumed before you butchered it are deposited.

To remove the crop:

Tip: To have a light crop with less food, isolate your chicken for a few days before butchering it and reduce its food intake. 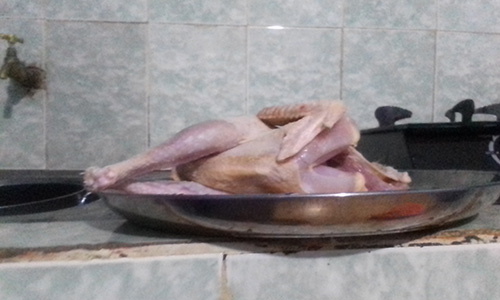 To remove the neck:

Tip: Cut the neck off after removing the crop to avoid spilling all the junk in that sac on your meat.

Related: The Dos And Don’ts Of Buying Livestock 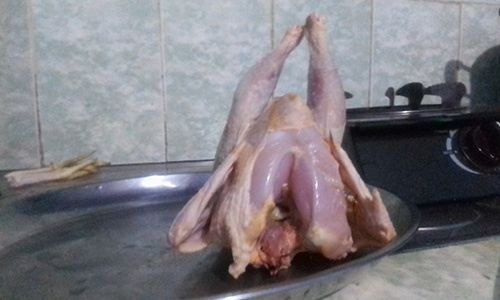 To remove the oil gland:

Tip: Throw the gland away. It’s too much oil and could be infected. 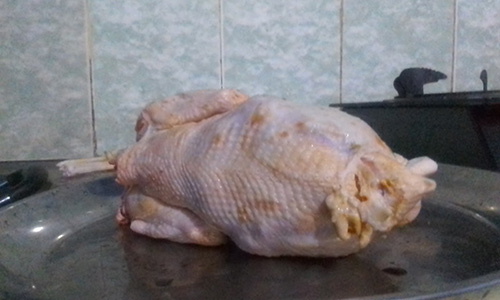 Tip: Avoid breaking the guts before pulling them out to avoid tearing the gallbladder and spilling feces on your meat. 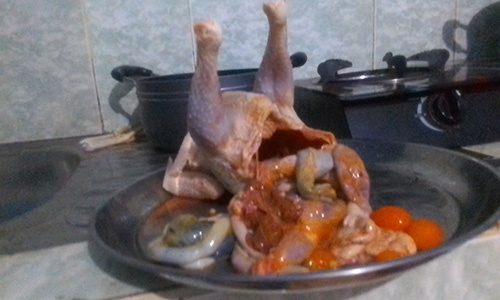 Separate all the giblets: heart, liver, and gizzard from the other unwanted inner organs. Wash them thoroughly but carefully to avoid tearing them down into smaller pieces. Be sure to drain all the blood from the heart if you want to store the giblet for later.

Tip: Watch out for the gall bladder while separating. The bile is a nightmare. It can stain your hands and contaminate your meat.
Slice your chicken into pieces 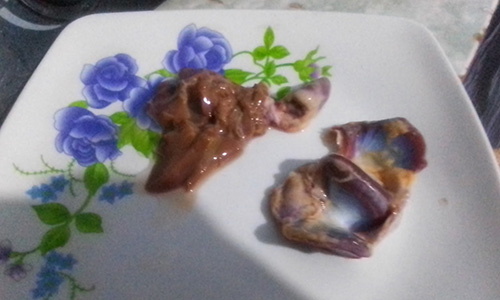 Cut your chicken into quarters, the infamous 10 pieces, or any pieces of your choice.

Tip: Cutting through the joints makes the work much easier compared to slicing your chicken randomly. 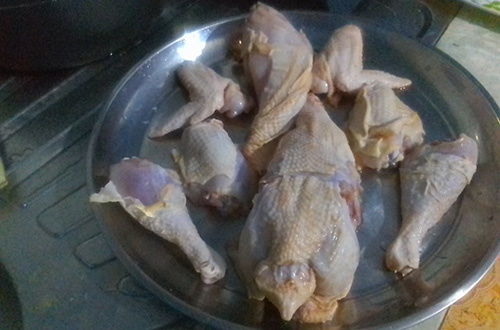 Once you’re done butchering your chicken, you can store it or chill it to cook later.

There are numerous recipes to try out with your nicely sliced chicken. You earned it! 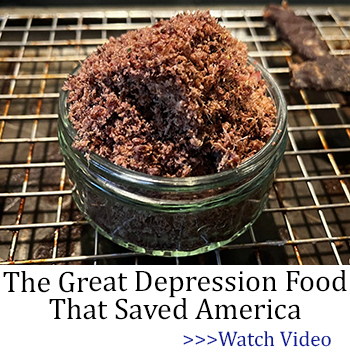