Raising pigs is one of the most cost-effective ways of putting pork in your freezer. Not only will it save you money, but you can make some extra cash on the side if you’ve got some spare pigs to sell. Raising your own pigs means you’re in control of what they eat, and the additives that go into their bodies, so you can guarantee healthy food for you and your loved ones. Pigs have gained an unfair reputation for being dirty when this is far from the truth. If you’re planning on raising pigs on your homestead, there are a few things you’ll need to know, and you can find all the information you’ll need right here!

How Much Space do They Need?

Not much! In general, pigs don’t require a lot of space; but whether you’re planning on housing them inside or outside will determine the size of their living quarters. Experts recommend approximately 8 square feet per pig. They don’t need a lot of space because they’re not the most active animals, pigs sleep, eat, and root. However, you’ll need a bit more space (10,890 square feet), if you can’t give them indoor shelter. The space is not so much for the pigs, but to manage pasture, and spread manure.

What Type of Food Should Pigs Eat?

Pigs are omnivores, they eat anything! But on a farm, they don’t have this luxury, they are fed a diet that helps them reach butcher weight the quickest. Typically, their meals consist of corn with alfalfa or soy up until the last one or two months. After that, depending on the breed, you can feed them barley to improve the meat marbling and fat quality.

What Type of Food Should Pigs Avoid? 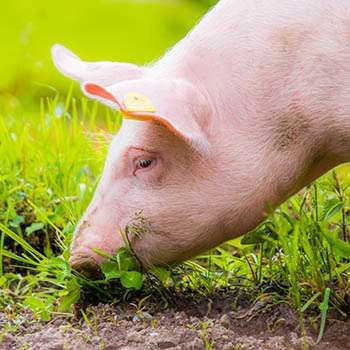 How Much Food do Pigs Need?

Feed your pigs 1 pound of food for each month in age every day. But don’t feed them anymore than 6 pounds per day, or your pigs will become overweight. The only time you should feed them more than this is if you’re feeding lactating sows. You should also pay attention to the length of time it takes your pigs to eat. Ideally, the food should be gone within 20-30 minutes, if not, it’s a sign they’re not that hungry. The remedy for this is to reduce the amount of feed, and slowly add more as their appetite increases. On average, you can expect it to take six and a half months to get a weaner ready for slaughter, assuming you got it at eight weeks old. During that time, you can expect one pig to consume 380 kg of feed.

Pigs also need plenty of water, they typically drink between 2 to 4 gallons per day. Root a tub into the ground so that the pigs don’t knock it over, and fill it with water several times throughout the day.

How Easy is it to Raise Pigs

You will often hear homesteads say that pigs are on the list of the easiest farm animals to raise; here are a few reasons why: 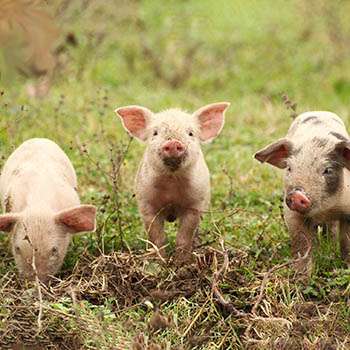 Although pigs are easy to raise, you can make life a lot easier for yourself, and your pigs if you have as much information as possible about raising them. Here are some additional tips to get you started:

The industry standard age for selling piglets is six weeks, but research suggests that when they remain with the sow for an additional two weeks, they don’t need starter feed, and their immune systems are stronger. When piglets have been nursed longer, they are slightly more expensive, but it’s worth the additional cost.

Get More Than One Pig

Pigs don’t enjoy being alone; like humans, they are happier, and healthier when they get to socialize with their own kind, and they have strong relationships. 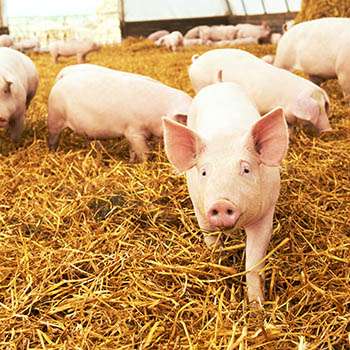 By nature, you are going to get attached to your pigs, and this can make the slaughtering process very difficult. You may have pigs on your homestead for different reasons, some you might be planning to keep as pets, and others that are destined for the freezer. You will need to do your best to make sure you don’t get too close to them, and a good tip is to name the pigs you plan on eating as food such as ham, bacon, sausage, etc. Give the pigs you are planning on keeping regular names, in this way, you’ve made a clear distinction between the pets and the meat, and hopefully, you’ll treat them accordingly.

How are you going to process your pigs? Will you do it yourself, or do you intend on getting a butcher to do it? If you are going to hire a butcher, you will need to book early because they are typically very busy, and don’t have availability for months at a time. If you do it yourself, make sure you know what you’re doing, learn about the type of equipment, supplies, and tools you’ll need.

One last thing, as sweet and cute as pigs are, they can be dangerous. At 100 pounds, you can expect some damage if one runs into your legs. You don’ want to get bitten by one either. Keep sorting boards nearby to guide pigs back into their pens if they get out of control. Sorting boards are large pieces of wood in a rectangular shape. You can either make your own, or you can purchase them at feed stores. 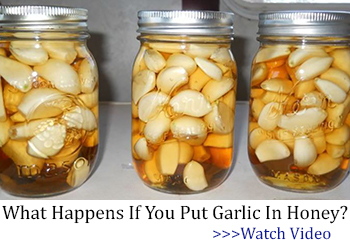 Why You Should Raise Ducks Instead Of Chickens

Foods You Should Never Buy And Always Make At Home

13 Plants That Thrive In Shade