When it comes to planting tomatoes, a gardener’s number one concern is tomato hornworms! They will destroy your plants quicker than any other irritant in your backyard. They camouflage very well with green foliage, and so you won’t notice them until they’ve chewed through everything, and your leaves are severely defoiled with large holes in them, or there’s scarring on the surface of your tomatoes. The good news is, you can get rid of hornworms before they do any damage, keep reading to find out how!

Prevention is Better Than Cure

If your tomato plants are not already infested with hornworms, start by preventing them from finding their way near your plants, to begin with. Here are a few tips: 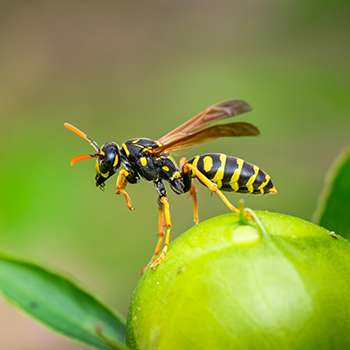 Wasps act as a form of biological control and feed on hornworms. You might see them with what looks like grains of rice attached to their bodies, they are called parasitic wasp larvae. These hornworms have been attacked by wasps and will eventually die.

Marigolds, basil, or dill will help keep many pests including hornworms away from your tomatoes. For hornworms, it’s like having the option to eat from a fast food joint or a five-star restaurant. You’re going to choose the better option right? Well, hornworms see marigolds, basil, or dill as the five-star option. They’ll rather eat them than your tomatoes; interplanting basically acts as a decoy. These plants also attract predatory insects that will send hornworms running. The additional benefit is that some of these plants, such as basil, give your tomatoes a stronger flavor. 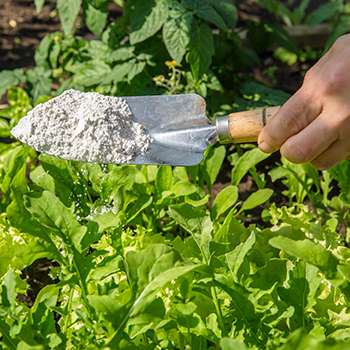 Diatomaceous earth is a non-toxic substance made out of fossilized tiny aquatic organisms. If you look at it under a microscope, it looks like broken glass. The pieces are so small that they won’t harm animals or people, but when insects walk over them, they’re killed immediately. Sprinkle some diatomaceous earth around your tomato plants and hornworms won’t stand a chance.

After harvest, till your garden, this will eliminate the pupae that overwinter in the soil. This method works because the pupae are so large they aren’t able to bury themselves deep enough into the soil. Tilling kills around 90% of pests.

5. Get Some Ladybugs and Green Lacewings 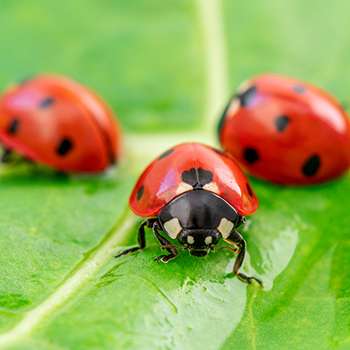 Both of these insects feed on hornworm eggs and hornworms. Scatter some of these around your garden, and they’ll create a barrier between your tomato plants and the hornworms.

After each planting season, rotate your crops because hornworms spend the non-growing season beneath the surface, at the beginning of the next season, they come back for your tomatoes. You can prevent any damage by moving your tomato crop to another location in the garden. Also, rotating them with a light feeding plant will help the soil because tomatoes feed heavily on the soil.

Covering the ground with black plastic mulch will stop the hornworms from coming out of the soil. However, it is not advised that you use this method in a hot climate because it increases the soil temperature. When the soil temperature gets too high, it damages the plant roots and stunts their growth. 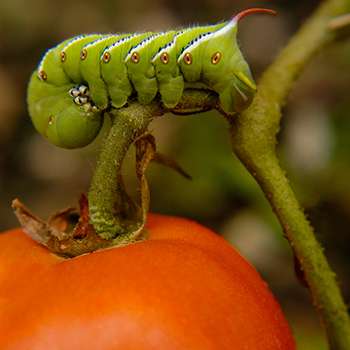 Most gardeners find that this method works well, but it’s time-consuming. You will need to walk through your garden several times throughout the week to check for hornworms. Despite the fact that they camouflage well, you’ll spot them if you have a keen eye because they’re so large, and adult tomato hornworms have a horn sticking out of their rear so you can’t miss them. They are not harmful, but you’ll probably feel more comfortable if you wear gloves. It will also help to spray the leaves with water before you start because this will force them to move, making it easier for you to spot them. Carry a bucket of hot soapy water with you and drop them in as you go.

If you have a large infestation of hornworms, you may find that handpicking doesn’t get rid of them fast enough to be effective. In which case, you can use an organic pesticide. Some good options are Bacillus thuringiensis or spinosad, they are both short-lived which means the effects only last until the job has been done. Basically, once the hornworms are dead, you won’t need to worry about the pesticides causing any damage to your plants.

Bacillus thuringiensis is preferred because it’s a form of bacteria naturally found in soil, and when hornworms eat it, the effect is paralysis of the digestive system. Once the digestive system has been paralyzed, it will stop feeding and die shortly afterward.

If you have an organic garden, chemical control might not be the best option. Although they will quickly get rid of tomato hornworms, they may cause damage to other plants. However, there are some nonsystemic options such as Sevin Insecticides; this type of chemical control won’t penetrate plant tissue, and once the hornworms are dead, you can wash it off.

If you don’t want to use any of the above methods, many gardeners have had great success with a homemade spray mixture containing liquid soap and water. Once you’ve sprayed the plants, sprinkle them with cayenne pepper, and this will repel the hornworms. However, you will need to be diligent with this method, and make sure you repeat it after a rainstorm.

Some gardeners claim you can compost hornworms, but this isn’t a good idea. You may kill the majority of them, but the ones that survive will keep breeding and continue their cycle of infestation. If you are going to get rid of them manually, kill them in a bucket of hot soapy water, and dispose of them in a drain far away from your garden.

9 Best Plants That Naturally Repel Pests from Your Homestead

Best Crops For Your Survival Garden