10 Surprising Ways Cast Iron Cookware Will Help You When SHTF

One of the best types of cookware is cast iron, which is why it would be a great option to have in an SHTF scenario.

It might not be the lightest cookware, but it would prove handy. To survive, you’re going to need something to cook, and having a cast iron will enable you to cook and do many other things you’ll discover in this article.

Is Cast Iron Durable Enough for a SHTF Scenario?

If you’ve used cast iron before, you know how strong and heavy it is, but for a reason.

You won’t have to worry about breaking it while cooking. Nothing can chip these pans, and they can withstand very high temperatures, making them perfect for use directly on a campfire.
Most pans can’t withstand that much heat, but cast iron can withstand as much as 500°F without burning the cure off or being damaged.

Food in a skillet tends to taste better.

That may seem crazy to think about in a chaotic situation, but trust me, it’s not. Good tasting food can boost your spirit when in crisis.

If having a great-tasting meal can motivate you to live another day, that’s a huge plus. The notion behind the better taste is because of the equal distribution of heat that cast iron provides. 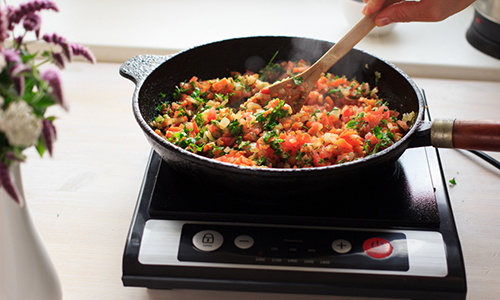 The Healthier Choice: Cast Iron vs. Other Pans

Another reason to love cast iron is its health benefits.

With seasoned cast iron, you don’t need to oil your pan. This remarkable characteristic takes a load off as you won’t need to pack any oil, making your meals healthier. Cast iron is even healthier than non-stick pans because none-stick contains Teflon, which can release harmful chemicals as you cook. These chemicals can give you flu-like symptoms.

So why risk your health, even if you’re not in an SHTF scenario?

What Foods Can You Cook With Cast Iron Pans?

The short answer is: anything!

These are great choices, because they are deep enough to cook anything. You can even opt for a Dutch oven, which is heavier and more like a pot – great for making stews and soups. Whichever one you choose, both can cook any meal you desire. 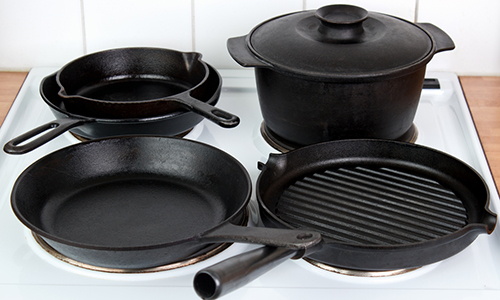 What Impact Does Iron Have on Your Health?

Add to the previous points about health benefits – cast iron is a brilliant source of iron.

Another Special Use for a Pan

They are heavy-duty items – imagine being hit on the head with one of those! If you have any ammo at all, it’s probably going to run out, so you’re going to have to improvise to defend yourself.

Related: 6 Best Guns To Have Around Your Homestead

They last forever! Their durability allows you to never worry about them breaking or rusting.

It would probably come out unscathed after the SHTF scenario. 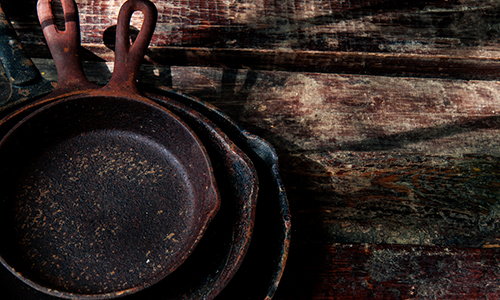 Cast iron is very affordable, depending on where you get it.

But the best place to get them for a bargain is at antique stores, flea markets, and yard sales.

Using them is also inexpensive as they require a little fuel. Whether you’re home or in the woods during a crisis, using energy wisely is vital. Cast iron gets an A+ in this department because they are good conductors of heat.

Cleaning cast iron pans is super easy! If you can avoid washing them, you should.

Washing your pan often removes the non-stick properties, rendering its best qualities obsolete. To clean it up, scrape off the visible residue. If the seasoning is still good, then the food won’t stick.

As previously mentioned, cast iron holds heat superbly well. You can test this out by heating the pan like any other.

After the pan is heated up, you should proceed to lower the temperature you’re using to cook or take the pan off the fire. You’ll realize that the pan will continue cooking the food as the pan will remain hot for some time. The best at doing this is the Dutch cast iron ovens. 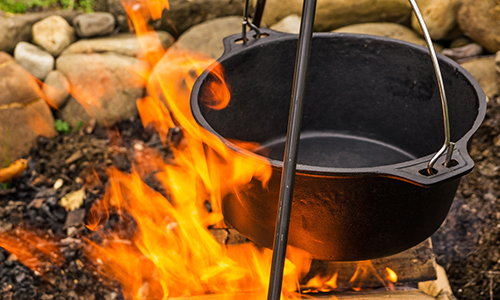 Seasoning is what gives your cast iron pans non-stick properties. It is something you should do before an SHTF scenario occurs, so you’re fully prepared when it’s time to go.

To do that, clean your pan. Then remove all the moisture from the pan with a cloth and leave it for a while to dry. Apply melted shortening that or vegetable oil. Put your pan in the oven for an hour at a temperature of 375°F. Shut off your oven after the hour has elapsed and left it to cool.

Though cast iron might be heavy, it’s worth having around as it allows you to cook, which is essential for a long-term survival plan.

Wherever you choose to go in a survival scenario, there’s no valid reason you couldn’t leave the cast iron there. That way, there would be no need to carry it in on your quest.

Whichever road you choose, or decisions you make, choose a cast iron. 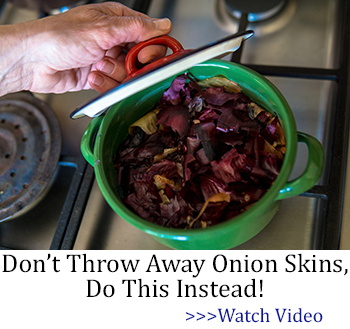