What Happens If You Spread Coffee Grounds In Your Garden

Perhaps you’ve heard of using coffee grounds in your garden. There are many opinions about coffee ground use in the garden and most of them are positive. Some others nearly forbid it and there are good reasons why. We’re here today to tell you why you should, why you shouldn’t, and what will happen if you use them anyhow. Grab a mug of your favorite brew and let’s get hoppin’!

When people talk of using coffee grounds in their gardens, they’re most often referring to used coffee grounds, not fresh ones. So, if you happen across a bunch of soon-to-expire canisters of Folgers, we don’t really recommend pouring them directly into your garden. 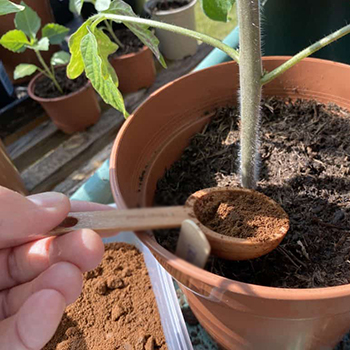 Used coffee grounds give a soft acidic punch to your soil and offer an organic bulking ability that no other mass really has other than peat moss (side note: coffee grounds are not a substitute for peat moss; they’re similar in nature but definitely don’t replace one with the other).

Fresh coffee grounds are so acidic that they can scorch some sensitive plants.

If you decide you want to go ahead and pour your morning mash on your compost pile, we say go for it: but keep a few things in mind. Some plants will completely recoil from coffee grounds. Others will explode past the rim of their containers. Others still may show stunting or may have no reaction whatsoever. Coffee grounds are great when used properly, but it takes some experimentation to see what proper use looks like in your personal garden.

What Plants Hate Them

Sensitive plants, such as salad greens and other such like plants, are not going to enjoy your brew remains getting tossed on them, worked into their soil, or otherwise anywhere near them. Though many other plants will tolerate coffee grounds or, in some fewer cases, do better because of them, anything in the brassica family or that is easily scorched by the sun will get the same effect by adding coffee grounds.

Now, this isn’t true if you’re using a handful in a big compost pile. If you want to add a little pep to these plants and still want to use coffee grounds, I honestly recommend making a cold coffee “tea” and pouring just a bit on them with their regular fertilizer. That way, they’re getting a few good nutrients without too much coffee acid either stunting them or causing them long-term calcium loss.

You also see the complete rejection of coffee with some fruit trees, though this is usually only in large quantities. Apples, in particular, taste weirdly smoky if given large amounts of coffee and some seem to think this is because certain antioxidants are absorbed by the tree and passed on to the fruit. Though uncommon, this makes it easy to ruin your fruit tree harvest for the year.

If you are bound and determined to be a 0-waste household and you really want to find an alternative solution for your coffee grounds, I recommend spreading them out to dry and then using them in potted plants below the rock layer. Just a tiny handful is more than enough for anything 8 quarts and smaller and it gives them a constant source of mild acid throughout their growth cycle.

What You Can Expect

If you use coffee grounds sensibly with berries or, for instance, kiwi vines, the fruit will likely explode and the vines will get very long, very dark in color, and practically do the cha-cha every time you come out with a fresh batch of coffee grounds for them. 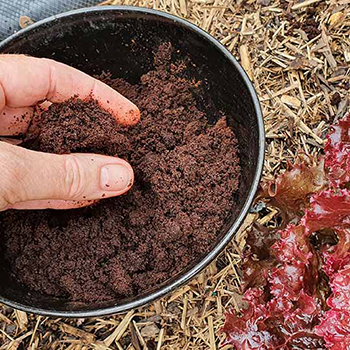 Basically, if you’re growing plants that love acid (like blueberries do), there’s nothing better than you can give them. Some people debate heavily about limestone vs coffee ground and I sit firmly in the second camp. Limestone is great for those who don’t drink coffee but for those who do? Use those grounds and see how excited your plants become.

And, better yet, you’ll never taste it in the finished fruit. The vines simply don’t pull those antioxidants or tannins into the fruit whatsoever, they just use them to grow bigger than ever and put out a ton of flowers.

One thing you may see is that beneficial insects tend to avoid plants with heavy amounts of coffee grounds. We think this is because the coffee scent tends to overwhelm the flowers that the pollinators are seeking. If that becomes the case, mulch over your coffee grounds to try to hide the smell and gently crush a flower petal or two to bring the pollinators running- well, flying.

What To Do If Your Plants Love It

Don’t overload them! One of the most harmful things that can happen is giving a plant a little too much coffee. For instance,  blueberries should only get a little coffee every week or two. Otherwise, they may become too dependent on it as a source of acid in their diet and send out tons of runners to find more when the source gets trimmed back toward the end of the year.

If you’ve read this information and you’re feeling uncertain, I strongly recommend that you speak with your local garden club about the exact variety of plants that you want to place coffee grounds near. There is no better advocate for your local area and no one who knows your soil, pollinators, and so forth better than that club does. They’ve been dealing with that dirt since long before you came along and likely will be once you move (or you’ll end up helping people who come along as a member of that club).

Related: Why You Should Use Banana Peels In Your Garden

It’s perfectly natural to be nervous about such a big soil amendment, but always remember that you can remove it if you put it in a single area and don’t like the effects of what it’s doing to your plants. We strongly recommend pitting your supplements and watching how your plant reacts to all of them before spreading them evenly in the soil. Your plants will tell you what they like, dislike, and desperate need and they’ll do it so loudly that you won’t be able to deny what they’re saying.

Always watch your plants. You’ll learn more than anyone can ever teach you just by doing that. Happy Gardening!

⇒ How To Build A Never-Ending Pharmacy In Your Backyard