The Best Chicken Breeds for Your Homestead

Are you looking for the best chicken breed for your small farm, backyard, or homestead? One of these breeds is likely to be the perfect choice!

In this article, you’ll learn the origins and characteristics of five of the most popular and versatile dual-purpose birds available today.

There are hundreds of chicken breeds out there, from gamecocks first domesticated millennia ago to high-production industrial cross-breeds developed less than ten years ago, and choosing from this embarrassment of riches is one of the most fun parts of starting a backyard chicken flock.

First-time chicken keepers are often focused on chickens that lay lots of eggs as the best measure of a good homesteading breed. But there’s a lot more to the story than that. Hardiness, meat production, size, temperament, and broodiness can all affect a breed’s suitability for your farm and family.

Some homesteaders may also be invested in finding a heritage or endangered breed to preserve as a piece of living history. The breeds on this list tick all of these boxes and more, so read on to find the perfect bird for your homestead.

The Australorp currently holds the world record for most eggs laid by a hen in a single year (364!), but there’s a lot more to this Australian beauty than her (admittedly impressive) egg-laying skills. The name “Australorp” gives a pretty good clue as to the breed’s origins.

It was originally bred down under as an Australian version of the Orpington, a popular English layer. The modern-day Australorp is smaller and more productive than the Orpington, which has been pushed away from production into being more of a show breed.

Australorps gained popularity in the US in the 1930s because they were one-half of one of the most successful hybrids producers of the period. They are now beloved on homesteads for their steady production of large brown eggs and their utility as a dual-purpose bird.

Australorps are muscular and very active, producing delicious lean mean, especially if they’re allowed to free range. They are also noted for their calm, even-keeled temperament and for rarely going broody. 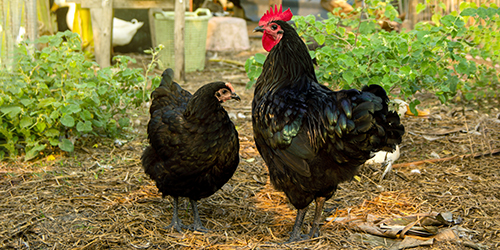 The story of the Delaware breed is a dramatic boom and bust that illustrates just how quickly industrial chicken production can move on to a new, more productive cross and all but eliminate the old favorite from existence.

Delawares were the favored broiler of industrial chicken companies on the American East Coast for about a decade, beginning from their inception in 1940. Within 20 years, however, they had been almost completely usurped by a more efficient hybrid breed, leaving the Delaware critically endangered even today.

Homesteaders and small farms are working to keep this breed alive, and they are indeed well worth preserving. In addition to their charms as a broiler, Delawares are reliable layers that produce 200-300 large brown eggs every year. They also have stunning white feathers with black bars and red combs, which have given the breed a new life as a show bird.

New Hampshire Reds were developed by the University of New Hampshire in conjunction with local farmers in the early 20th century by selectively breeding Rhode Island Reds for better broiler traits. The resulting bird is larger and grows faster than her predecessor. While both breeds are dual-purpose, the New Hampshire is the superior meat bird.

A full-sized standard rooster can reach almost 10 pounds; hens average around seven pounds. (Like most of the breeds here, the New Hampshire Red also exists as a smaller, bantam bird.) With antecedents in an egg-laying behemoth like the Rhode Island, it’s no surprise these birds are also regular layers, producing around 200 large brown eggs a year.

New Hampshires, however, aren’t the friendliest or gentlest of breeds. They can be aggressive with each other and are prone to going broody, which does make them excellent mothers. 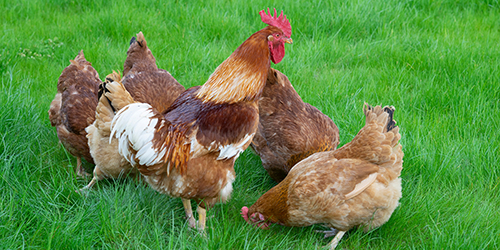 Also called the Barred Plymouth Rock, this breed originated in Boston and Worcester, Massachusetts, in the mid-1800s. There are several different stories about their origins, but the most commonly cited antecedents are the Dominique or Dominiker, the oldest breed of American chicken, and the Java breed. In any case, the result was a beautiful dual-purpose bird noted for its striking barred (read: stripy) plumage, though other colors were developed later.

Through the end of World War II, it’s possible the Plymouth Rock was the most popular and widely kept chicken in American history, favored for their quality meat production and regular laying (about 250 large brown eggs a year). In fact, the Plymouth Rock was one of the first birds to be widely used for industrial-scale meat production. By the 1950s, much like the Delaware, it had been replaced by more efficient hybrids (bred from Plymouth Rocks) and eventually almost disappeared.

However, a good dual-purpose homesteader will always have fans, and the Plymouth Rock has recovered in recent decades. Their docile temperament makes them good mothers to their chicks and a good choice for people with younger kids. 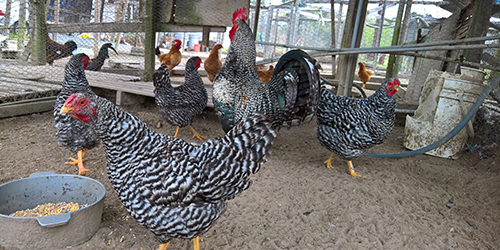 The Rhode Island Red is one of the most iconic chickens of all time, and there’s good reason for their ubiquity in pop culture and on homesteads. Reds are a hardy, dual-purpose bird originally bred in Massachusetts and, of course, Rhode Island in the 1850s. Their namesake crimson feathers come from their Malay ancestors, one of several Asian breeds crossed with Italian Leghorns to produce this breed.

Because Reds were purpose-bred for small New England farmers, they are perfect for modern-day homesteaders. Modern strains, especially, are prolific layers, producing upwards of 300 large brown eggs a year. A heritage strain will lay closer to 200 eggs a year but makes up for it by laying (and likely living) longer and providing better meat. Whichever strain you choose, your hens are sure to have the big, sassy personalities this breed is famous for. 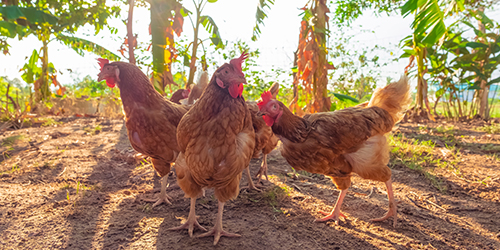 There is no one “best” chicken breed for every homestead, but it’s hard to argue that these breeds aren’t among the cream of the crop! Do you have a favorite breed not listed here? Let us know what kind and why you like them in the comments.

This article was written by Chris Leslie and first appeared on The Organic Prepper.

Chicken Friendly Plants To Have In Your Homestead 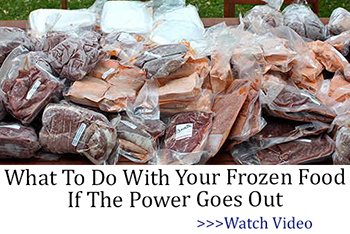 Dwarf Fruit Trees You Can Grow In A Tiny Space

How To Make Pickled Garlic (And Why You Should Do It)