How To Identify The Venomous Snakes On Your Property

In the United States, you can find about 30 venomous snake varieties nationwide. It is estimated by the CDC, that approximately 7000-8000 venomous snake bites occur every year, about 5 of those being fatal. Although, most venomous bites can have long-lasting complications, with victims continuing to suffer after they have survived treatment.

Snakes are the natural predators of small prey, like insects, birds, rodents, fish, and even some aquatic inhabitants, like frogs. They help keep those populations in natural balance with nature.

Keeping harmful snakes away starts with assessing the type of invasive snake you saw, and in turn, if you should use any defensive measures to protect your homestead.

Although there is no single method of identifying a venomous snake. There are a few indicators that can help you assess a snake’s lethality. Some snakes can be categorized as venomous by the shape of their heads.

Snakes with a triangle head and 2 “pits” or holes on their snouts are classified as venomous. These pits aid to the term “pit vipers”, indicating a venomous species. The snake uses the pits to seek infrared radiation from prey. 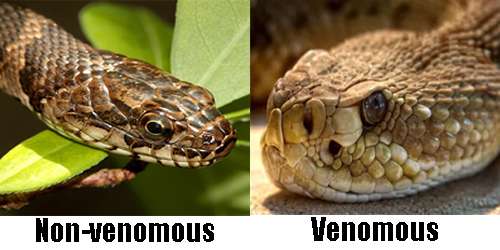 The non-venomous varieties have round heads and round pupils. Pit vipers have thin, black pupils that are surrounded by yellow-green eyes. Also, they can be easily identified if you are close enough to see their eyes and heads. 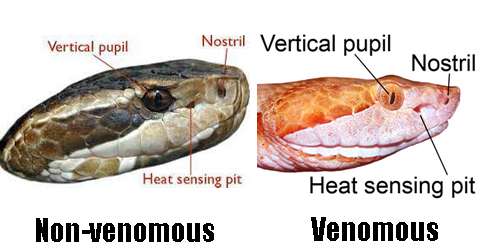 By combining your analysis of their eyes, and heads shapes, you can determine if their venom is toxic. Using any model to identify if their markings or color should only be considered for snakes that have profound markings, like the diamondback rattlesnake. Also, identifying potentially venomous snakes by only using their colors or markings is not an effective method to correctly classify the threat.

A special feature like a rattle can be a definite indicator, but not entirely accurate either. A bull snake can almost entirely convince a passerby that they are indeed the venomous rattlesnake. Their bites are painful, but not venomous or fatal.

Ensure you are factoring in all identifying methods to determine the snake’s true identity.

This is a semi-aquatic snake. You will find them near freshwater sources hunting for their next meal. They can be destructive foes should you stumble upon one. They have been known to tear away flesh with their massive jowls. Also, their house has large venom glands that contain cytotoxic venom that can result in amputations or death for the victim. More than that, they have a strike range of ⅓-⅔ their body length away. 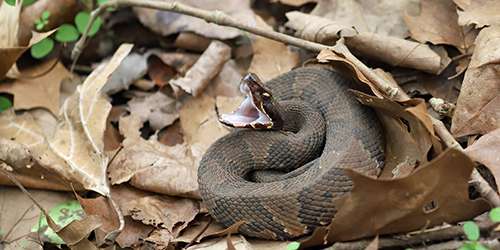 Can be found in almost any habitat. Lush forests, waterways, swamps, and even agricultural fields. They have large long fangs that deliver copious amounts of venom to the victim’s bloodstream. Also, they are however mildly tempered and sound off their rattle warning to warn possible threats from their paths. More than that, they have a strike range of ⅓ to ½ their body length. 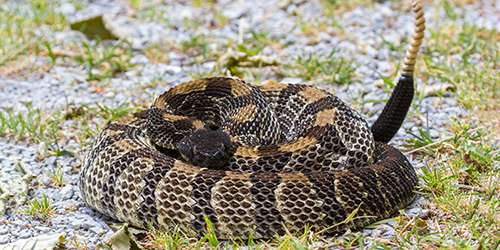 Found across western North America, the Black Diamond rattlesnake boasts a highly toxic venom that requires copious amounts of antivenom doses to treat the victim. The venom attacks nerve endings and causes excruciating pain to the unlucky recipient. They can strike to a range of over ⅔ their body lengths. 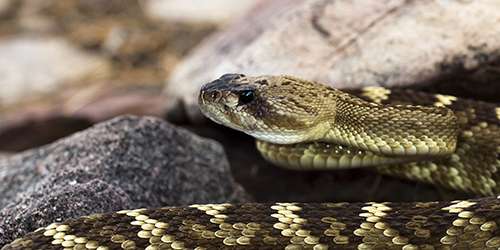 A very aggressive species, the Copperhead is known to freeze when stumbled upon and enact a very defensive stance to warn potential threats. They do however have a weaker venom strength than other pit vipers. Copperhead rattlesnakes can strike up to half their body length. 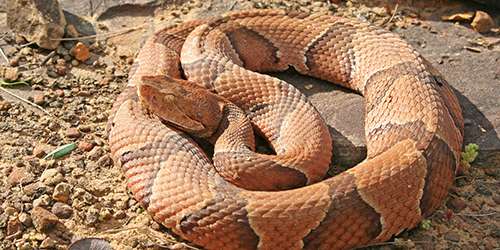 A reclusive but deadly snake is the Eastern Coral Snake. They are one of the most dangerous animal inhabitants in the southwest. Eastern Coral Snakes have very little control of the volume of venom produced during each strike. Also, they have the potential to store enough venom to cause 5 human fatalities. This means one bite from them could mean death within 2 hours. These snakes can strike to ⅔ of their body length. 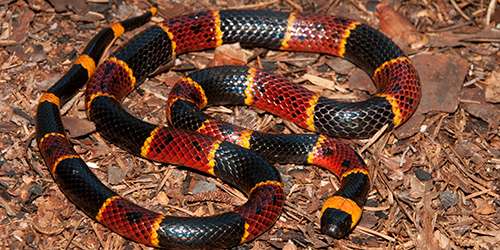 Tips to Keep Them Away from Your Property

Most snakes are active when temperatures are between 80-90 degrees. Hunting during the early mornings or late afternoons. They seek out areas that have a good population of their preferred prey. You can discourage them from hunting and inhabiting your property.

Worst Case- Someone is Bitten

As there are over 30 different species of venomous snakes inhabiting the United States, it is advised to know how to effectively deter them from your property and what to do should you cross paths with one. It is safer for us and for the snake.

How to Prepare Your Homestead In Case Of a Natural Disaster

11 Things That Won’t Lose Value In A Crisis