Roughly two-thirds of US families have one or more dogs. Most allow their dogs in the house, but there are some families who keep their dogs outdoors. But even families who have their dogs living in the home need to leave them outdoors from time to time. Sometimes that ends up being the wrong time, and the dog gets caught outdoors in bad weather.

Granted, some dogs love the outdoors and their coats help keep them warm when the weather starts getting chilly. Even so, sometimes the temperature drops faster than we expect, leaving our furry friends and guardians stranded and cold. It would be nice for them to have some place to go into, just to keep warm.

There are a few basic things to do, as part of making a good winter doghouse which will keep your friend warm, those times when they have to be outdoors and need a safe refuge.

Related: How To Build Your Own Wall Hanging Can Rotator

The Start (The Foundation)

Just like building a home, you need to start your dog’s house by building a frame. The siding and insulation will be added to that later. But just how big should you build it? That depends on the size of your dog.

All you need to do is measure your dog’s length and standing height to figure out the dimensions. The bedroom should be roughly square, with each wall being roughly the length of your dog, lying down, as shown in the photo below. Keep in mind that you’re going to be adding a ½” thick layer of OSB (oriented strand board) to the inside of the walls, so make your framework slightly larger than that. The height of the doghouse needs to be at least four inches higher than the doorway.

The entry room only needs to be wide enough for the dog to get in, more like a hallway than an actual room. Keep in mind though, that if it is too narrow, the dog may spook and not go in. Making it roughly half the width of the bedroom works out well. 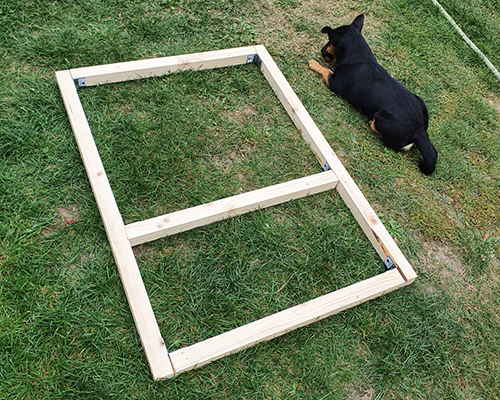 To make the frame, use 2”x 2” dimensional lumber. The basic idea is a box, with a patrician to divide it into the two rooms. So start out by making the outline of the floor, using the dimension you measured for your door laying down, plus one inch, for the bedroom, and the width you need for the door for the other room. You’ll actually need three identical pieces, one for the bottom, one for the top and one for the lid.

The easiest way to connect the pieces together is to use metal angle brackets on the inside of the corners, as you can see in the photo below. it really doesn’t work well to glue and nail the pieces together, because end-grain doesn’t glue well, and all the joints have at least one piece which is end-grain. Screws don’t work well either, as the screw threads tear up the grain, eventually causing the joint to fail. Using inexpensive metal angle brackets provides the strongest connection, helping your pet’s house to last longer.

Once the top and bottom are put together, you’re going to need to cut six identical pieces of 2”x 2” to make the vertical parts of the frame. These will go in the four corners, as well as at both ends of the dividing wall. The dividing wall also needs to have the doorway framed in. That means adding in one additional vertical element, along with a horizontal beam across the top of the door frame. As you can see in the picture below, there are several inches of space above the doorway. 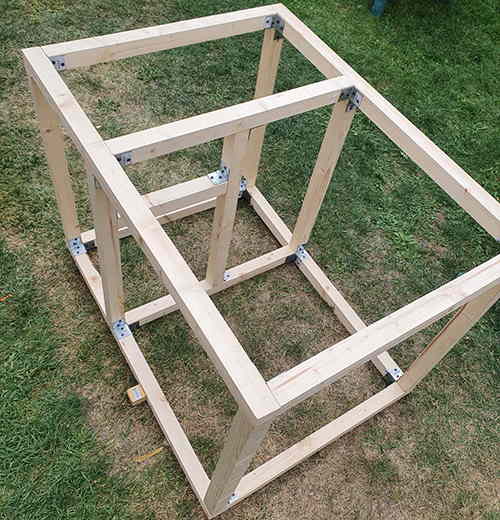 The Flooring And Insulation For Winter

With the frame in place, it’s time to put in the flooring and insulation. Start by cutting a piece of OSB large enough to cover the entire bottom of the frame, all the way to the edges. This can be attached to the bottom with glue and nails or screws. Make sure the corners all match up, as this piece is going to keep the corners of the doghouse square.

With that piece in place, flip the doghouse over, so that it is on the bottom. Then cut and place either fiberglass batts or Styrofoam sheets to fit inside the floor. Then cover them with a layer of OSB, notched to fit between the vertical structural elements. 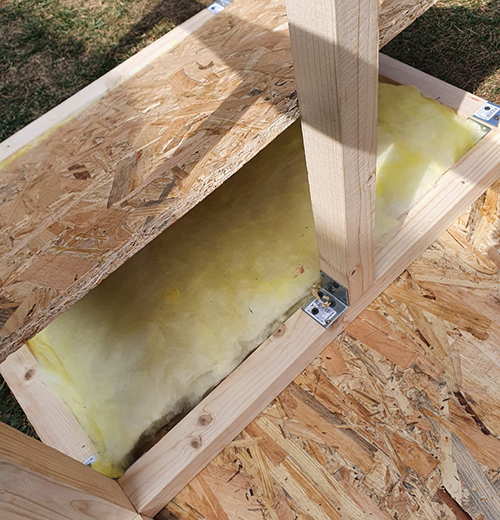 The Walls Of The Doghouse

With the floor in place, the interior walls can be added. Notice in the photo below, that the piece of OSB being used for the wall is notched to go around the horizontal structural elements. It only goes halfway across the vertical elements, leaving wood for the other panel to attach to as well. 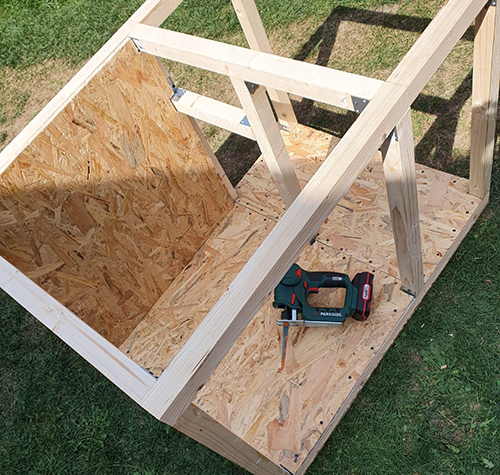 Continue adding the OSB to the inside of the dog house, finishing off all the walls. If you look at the picture below, you’ll see a 2”x 2” block nailed above the flooring, on the left side of the picture (the wall the dog is leaning against). That was added, because there was nowhere to attach that interior wall, as the floor covered the frame element there. You will need to add such blocks all the way around the base,with the exception of the doorway.

Another important thing to notice from this photo is that only the end piece (next to the dog) is attached to the vertical corner brace. The wall that the dog is leaning against is not. This is not a problem. As the OSB panel is attached at the top and bottom. The doghouse doesn’t need the full structural strength of a home. It’s not as if the dog is going to push this wall down or hang a heavy mirror on it. As long as the board is stable, it is sufficient. 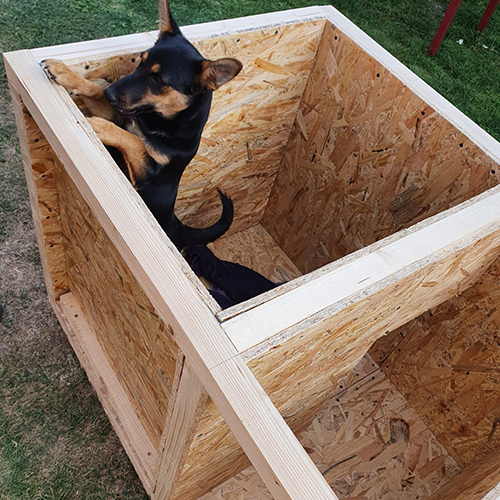 With the interior walls in place, it’s time to install the insulation and put the siding on the house. The same fiberglass batts or Styrofoam sheets that was used in the floor can be used in the exterior walls. Glue or staple them in place, so that they are not a problem as the siding is installed.

There are several options to choose from for the exterior siding. In this case, we chose to use some beaded planking we had sitting around, which would normally be a rather expensive option for a doghouse. But it was leftover from a project, so it was ideal. A less expensive option would be to use T-111 siding, probably the least expensive siding on the market. 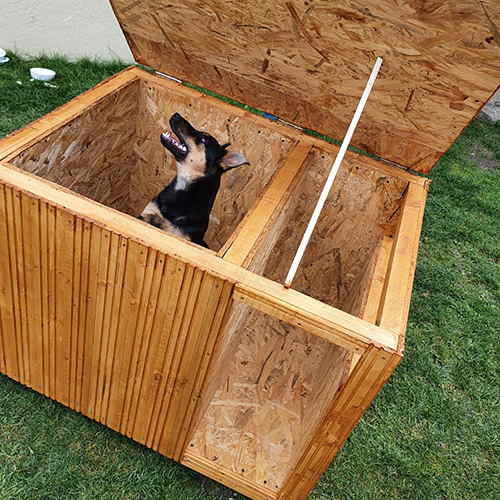 The only other thing that’s left is the top. This is where the third frame comes in. It is built essentially the same way as the rest of the doghouse, starting by attaching a piece of OSB to the inside, squaring up the frame. Make sure that it matches up with the doghouse itself, before putting in all the fasteners. Then add the insulation and finally the siding for the exterior of the top.

The top is best attached to the doghouse with hinges, allowing it to be lifted to get to the dog inside and to clean the doghouse, if necessary. a handle can be added at the front, making it easier to lift the lid. We didn’t bother, but a prop rod could be installed permanently, although that might end up being a problem, if it falls down and scares the dog.

Your finished doghouse is best sitting in the corner of the patio, where it has some protection from the weather. That will help keep it from getting cold inside, as well as protecting the wood from damage. 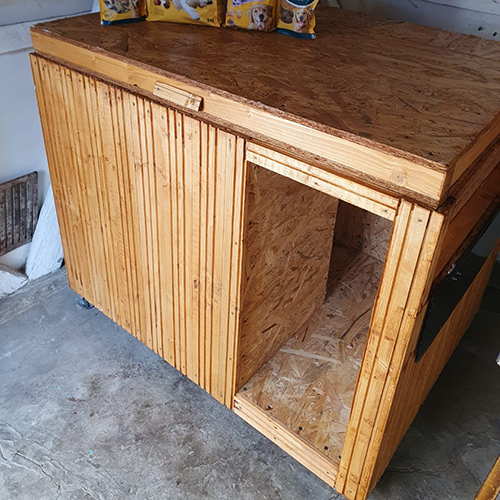 It’s important to have a doghouse, even if your dog lives in the house with you. If you’re going to build a doghouse, why not make it one that’s insulated against the cold, so that your family friend can really get out of the cold and be relatively warm while they wait for you. If it’s done right, the dog’s own body heat will warm the doghouse, once they get inside. 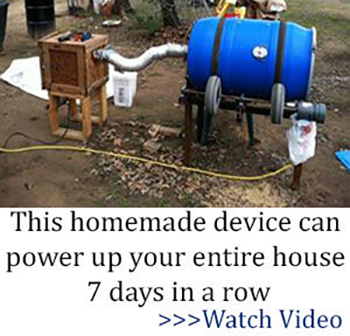 Easy to Build Root Cellar in Your Own Back Yard (Video)

How to Build a Smokehouse In Your Backyard (with Pictures)