When Did Independence Become Illegal?

Over the last year, I have really started to notice a growing trend. At first, it was a news story here or there, usually talking about someplace far off. The news was disturbing, of course – people being forced to do this or that for violating some rule against what they could do on their land.

I wrote an article a while back about the illegal outdoor clothesline. People who live in HOAs (Home Owner Associations) know what I’m talking about. Many in the city also have laws that don’t allow clotheslines in yards, or have rules about not being able to see them from the road. Don’t even get me started on the rules against having food gardens in your front yard! I can understand why some municipalities would want to limit it: untended gardens can cause real pest problems. What I am talking about are blanket laws passed that limit what people can do on the property they own.

It’s like there’s an all out war against living independently from the grid.

I grew up in Alaska. You can still buy land here that isn’t part of any municipality and that means you truly own the land. No taxes, no restrictions (other than state safety and sanitation regulations), and no one to tell you “You can’t do that on your property!” Growing up, I thought that’s how it was. That was my normal. Imagine my horror, learning that people could get their land taken from them for not paying taxes or because the municipality decided they wanted to build a new road, right where your house is. You have no rights, no authority. You are responsible, but you have little authority against government (local or otherwise) entities.

Now I’m seeing people who are being kicked out of their homes because they live in tiny houses. I read about people who have their own grid with water, sewer, and electrical being forced to tie into the grid. I see people who are being told they have to remove a pond off their property because of some new law (never mind that the pond had been there over 100 years with fish and wildlife depending on it). Oh, and they had to pay for the removal, too.

It’s like there’s an all out war against living independently from the grid. It’s almost as if you’re a criminal because you don’t need what the government provides. You don’t need the electrical company’s power, you have your own – and you’re a criminal for it. Recently, here on my home island, the local utility company decided that everyone must pay water fees, even if there is no one living in the domicile. What that means is if you have a vacation home or a duplex, and no one is living there or using the water, you still have to pay. And there is little anyone can do about this ‘legal’ theft.

“If we aren’t being taught how to grow our own food, how to take care of ourselves and our families, and how to live without the need for huge governments, banks or corporations – as our ancestors once did – then we aren’t being educated; we are being indoctrinated to be dependent and subservient to the system~Gavin Nascimento.”

Of course, on top of all of that, there’s the requirement for licensing on everything from marriage to hunting, fishing to using the national parks set aside for our use. And though we have “the right to bear arms and defend ourselves from those who would do us harm,” we have to effectively get permission and go through hoops from the government to do so. The laws get more and more strict for the law abiding citizens, making it harder for us to exercise the right while the criminals are toodling along, bypassing all the red tape and still getting as many guns as they want. The “Gun Free Zones” are prime target areas to create victims, too. The only thing that will stop a bad guy with a gun is a good guy with a gun and that is a time tested truth. To stop the bad guy, you need a good guy with the same or larger ‘stick/rock/etc.’ But I digress.

There are raids on homes for growing food and raising livestock. I recall an article about a couple who bought growing equipment for an indoor hydroponic set up and were raided by police, SWAT-style. It was believed they were growing marijuana. Charges were never filed because nothing was found. The leaves found and tested in their trash, on 3 separate occasions, were found to be tea leaves, not cannabis.

There was a time in this country when the same government not only encouraged keeping chickens and having a “victory garden,” you were considered patriotic for doing so! Homesteading was patriotic. Oh, how times have changed. Now, you have to perform feats of super human patience and paperwork-filling skills just to get the organic label to put on food you may sell from your homestead/farm to the public. The government is perfectly OK with all these chemical sprays and dusts put onto our food as it grows but you have to go through some crazy stuff to prove you aren’t using any. The system is completely backwards and I strongly believe that is a direct results of Big Agra and their lobbyers.

“We can’t let these people grow and make and do for themselves! Then we lose profit! We lose control! Our investors will suffer!”

The world is so angry now, or perhaps I am just more aware of it due to social media and instant information. In many ways, instant information has decreased the value of knowledge. It’s so easy to just look something up that committing anything to memory isn’t done the same way.

I used to have dozens of phone numbers memorized when I was a kid. Not so much anymore – just pop open your smartphone and tap the picture! Knowledge is no longer earned, therefore its value has decreased. Now, that is not to say that the internet and social media hasn’t had some positive influences – I learned to can food (both water bath and pressure styles) because of videos and articles online! I learned a great deal about gardening in my zone (7b) and would not have had the successes I did when I started if not for it.

The desire to be away from cities, work the land, and provide for yourself is under attack. Not everyone can just up and move to the country and live the life they truly want. I’m currently one of them (working on it though!). 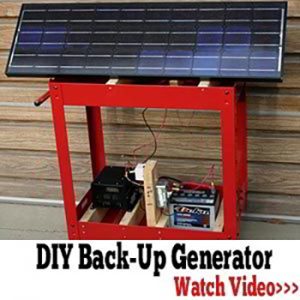 How to Make Emergency Survival Bread

How To Make Money Off-Grid: Making A Living From Your Homestead